Nicaragua in Central America was the destination of my last travel. I left in a typical winter day Hamburg and 36 hours later I reached Managua. The warm weather felt very good. I didn’t have to put on a big jacket, gloves, and hat to protect against the cold weather but instead put on mosquito repellant and sun milk. There were not countless mosquitoes there but according to several sources there were some which carried serious viruses so you better take some measures to protect yourself. And the sun exposure was also not to neglect. I didn’t put enough sunscreen on and so I ended up with sunburn – my shoulders, my chest, my face, my ears – o the red ears.
The weather is all year warm. In fact, I only saw cold water faucets, well it was more cool than cold. Who needs hot warm water if the temperatures is never below 20 degree C.
Nicaragua offers a lot of fresh fruits that grow locally- Melons, Coconuts, Bananas, Mangos, Avocados and a lot more. You can also see animals that you don't see in the European wildernis. I saw different Monkeys. There are a lot of different birds: 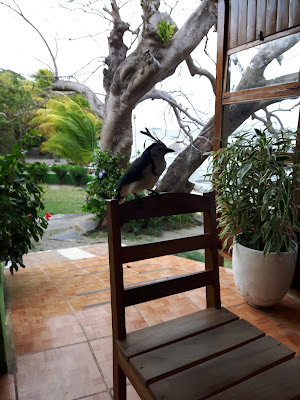 I mean a lot of them: 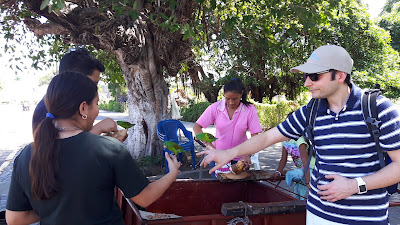 
Nicaragua has a lot of volcanoes. Some of them active, some of them sleeping. We went to two different volcanoes. The first was Mombacho, where we were driven in trucks up. On the way up you can see the change in the vegetation. The top is a tropical cloud forest. The second volcano is Maderas which we hiked up - and it was a tough hike. Maderas is on the island Ometepe in Nicaragua sea.
We started our hike early in the morning a steep climb. After a while, mud was added to the adventure. At first, I tried to avoid the mud. But after steeping two times into all the way up to my ankles, I didn't care anymore. And yes, it made exactly the sound that you imagine it to do. After four hours hike up and five hours down, I was tired and exhausted, dirty and full of pain. On our way back to the accomodation we passed a point where I had scenic view on Maderas, the volcano that destroyed me. I didn't have the drive to take a selfie so without any further ado, no photo:

The next morning I went back to that spot to take a picture but fog covered Maderas, and there was no way I could take a picture. So here again no photo: 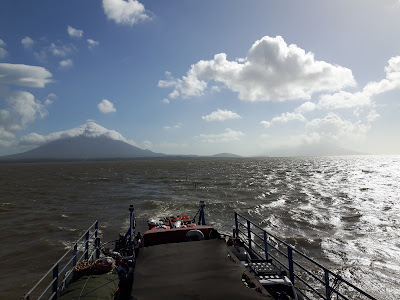 That's Maderas,... on the right... behind the clouds. On the left is Concepcion. So there was only one opportunity for me to take a picture. Who have thought Maderas could be such a diva.
What can I tell you beside that. Well there are a lot of beautiful spots, like the Apoyo laguna 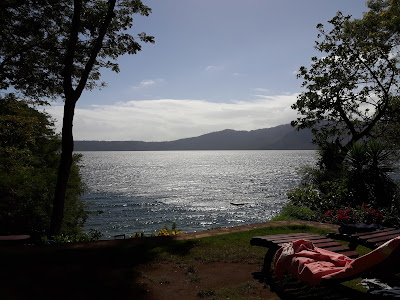 or the Pacific coast 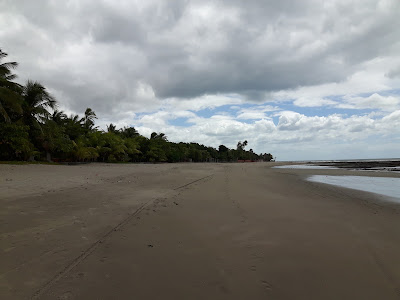 Yes, I could finally swim in the Pacific. Last time I was at the Pacific coast, I only dipped my toes in. Bottom line Nicaragua has a lot of beautiful places and too many crazy bus drivers. But that's something I can't blog about.
Posted by Soroosh Pezeshki at 19:05